FOREIGN STUDENTS IN POLAND. THE STATISTICS. 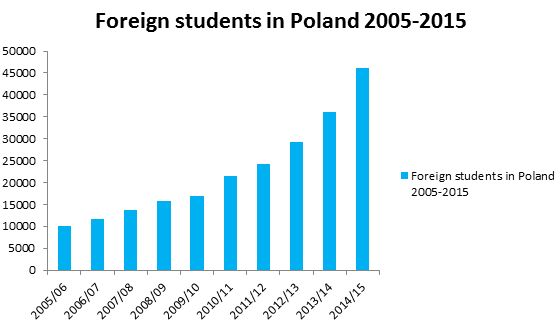 FOREIGN STUDENTS IN POLAND. THE STATISTICS.

Every year education abroad become more and more popular among the youth from CIS countries, the Near East, and other countries. Especially Poland became one of the most popular study destinations. More than once we have discussed the reasons which favor the popularity of Poland, and in this article we would like to show you the fact that Polish higher education establishments are open and adjusted to provide students from any part of the world with qualified education.

Nobody is surprised that the largest number of foreign students comes to Poland from Ukraine. In 2015 were 23 329. Ukrainians take the 50% of all international students in Poland. In comparison to previous years, the interest in Polish education has increased among the young Ukrainians. Every year more and more Ukrainians come to get Polish higher education, usually choosing education in Polish language.

The third group of students from other countries is Norwegians. In 2015 there were 1 538 Norwegians who have been studying in Poland. From year to year more students from Norway come to Poland and usually choose medical studies in English.

From 2004 Poland is the member of European Union. This fact had a big influence on inflow also of students from Europe. In 2015, 83% from all international students in Poland came from Europe. For example, 1188 students from Spain, 743 from Germany, also students from the Czech Republic, France and other countries of EU.

As compared to other countries, there are not many students from Asia in Poland – 5 602. It is worthy of note that for the first time in five years there was a rise in this category. Currently, in Poland there are 785 Chinese, 410 students from Taiwan, 545 Indians, 205 Vietnamese, and 211 students from Malaysia.

Also, students from Africa become more interested in education at Polish universities. In 2015 their amount was 719. The number of students from Saudi Arabia is also rising – 804, from Turkey – 1024. Unfortunately, the smallest amount of international students is Americans.

Those who are studying in Poland notice that every year more and more foreigners appear at the universities; many group mates from different countries help to develop one’s mental outlook and make new contacts. That is why, do not waste your time and join to the international group of students in Poland and get high-qualified European education.

It does not matter where you are from, Ukraine, Belarus, Kazakhstan, Norway, India or any other country, ENTRANT Company will be glad to help you to become a student in one of the Polish education establishment. We will solve all questions connected with admission process, accommodation and arrival to Poland.