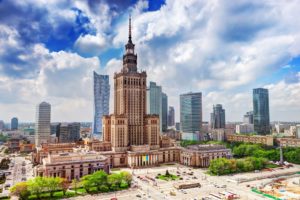 WARSAW is a capital and the largest city in The Republic of Poland, which is situated in the central-eastern part of the country, on the banks of the river Vistula. The city is the administrative center of the Masovia province and also a place of location of the central authorities of the country, foreign missions, headquarters, a large number of companies and associations, operating in Poland. Warsaw is a city which buzzes. History and modern life, traditions and spirit of change are interweaving here. Over the past 20 years “Manhattan” was raised in the heart of the capital. Offices, banks, hotels, shopping and entertainment centers were built. Here you will find new interesting objects made of steel and glass, original forms and unusual architectural solutions. Modern Warsaw is a city of young people. There are all conditions for business and science. Here is concentrated the largest number of higher education institutions in Europe, there are numerous research centers and institutes. The capital is always in motion. Warsaw is rich in cultural and historical sites: 74 art galleries, 48 museums, 38 theaters, 41 movie theaters, philharmonic, opera and operetta. 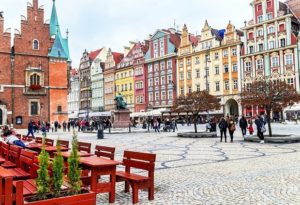 WROCLAW is not only one of the most important student centers, but also belongs to the oldest and most beautiful cities in Poland. Wroclaw attracts students not only with a rich scientific background, but also appeals with its unusual climate and the wealth of sights. The city has an exclusive location, due to the fact that it is crossed by 5 rivers: Oder, Bystrica, Olawa, Slyoza and Vidava. Interesting fact is that Wroclaw is the fourth largest city in Europe according to the amount of bridges. In addition, this city has 12 islands. Wroclaw is known primarily as a thriving cultural center that creates a continuous chain of events taking place in local theaters, operas, musical theaters, clubs, galleries, and there are often organized music festivals of international importance. The city is full of life and constantly evolving. Wroclaw has long been at the forefront of scientific cities. Today, Wroclaw is a dynamically functioning city with more than 300 years of history of academic tradition, with a population of more than 650 thousand people. More than 130 thousand students study in the city. Here you can get higher education in more than 10 state and about 20 private universities. Wroclaw attracts young people who want to develop themselves and look for prospects in the future. Constant inflow of investments and a large number of cultural events contribute to the uniqueness of this city. 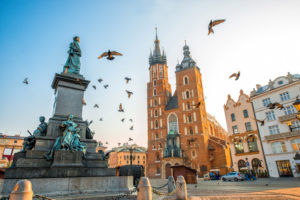 CRACOW is one of the oldest cities in Poland, as well as its cultural capital. In addition, it is a city with strong agglomeration and it takes the second place, after Warsaw, on area and population. Cracow is one of the most popular tourist cities in Poland. Here is situated the famous residence Wawel, where the ceremony of King’s coronation took place; and the Church of the Virgin Mary, with a unique altar of the Nuremberg master Vita Stvosh. The largest square of the medieval Europe – the central Market Square is also situated in Cracow. Next prominent part of the old city of Cracow is Kazimierz, which is the art district of Cracow. And the pearl of the city is Jagiellonian University – one of the oldest universities in Europe with the famous building Collegium Maius. This city is considered to be the most important science center in Poland. Education in Cracow is a broad proposal from a large amount of prestigious private and public universities. Cracow is a legendary city. There is no place for boredom at any time of day or night. During the day you can go shopping; relax in the cozy cafes, pizzerias and parks; have a walk through the market square among the street artists, mimes, florists and pigeons. As for the night, Cracow is a city of events until it will dawn. It is the city of music, light and fun. 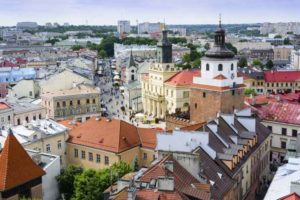 LUBLIN is the city of inspiration. It is the largest city in size in eastern Poland and takes 9th place in area and population. Historical and mysterious Lublin attracts with its rich architectural heritage. Beautiful Lublin Castle, Tower of St. Trinity Cathedral, Cracow Gate, Crown Tribunal, the Church of the Dominican Order, botanical garden and museum and other sights are considered to be the most attractive. In Lublin there are many cultural and artistic events, for example, the International Festival of Theatre. During some recent years a large number of stylish cafes, pubs and restaurants are appeared. Also, the city has many modern shopping centers, shops and cinemas. Lublin is an important academic center. You can get higher education in over 14 universities, including the Maria Curie-Skladowska University, Catholic University of Lublin, Lublin University of Technology, University of Natural Sciences, and Medical University. Lublin is a city of young people who make up more than 40% of the population. Lublin is a scientific and historical center, the creative, innovative city that is rapidly evolving. 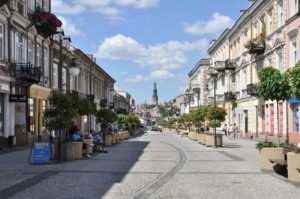 RADOM is a town in central Poland, located in the southern part of Masovia province. It occupies the 14th place in the area. The city is a center of engineering. Each year it is strengthening its position as one of the most important points on the industrial map of Poland. Radom is the largest academic center in Masovia province after Warsaw. Here are the Radom Polytechnic, a branch of the University of Warsaw, and the Maria Curie-Skladowska University, and about 10 prestigious private universities. In this town you can spend your free time visiting museums, galleries, theaters, cinema, and philharmonic orchestra. Every two years in Radom an international Air Show is organized. The greatest cultural monuments here are: Church of St. Wenceslas, Royal Castle, the Cathedral of John the Baptist, and Church of St. Catherine, Town Hall.